Katja's jeansass on his face

Katja makes sure that her slave gets used to her new jeans she just bought. So she sits on his face with her sexy tight jeans ass and smothers him. She likes his struggling and his pathetic tries to escape her as he runs out of air. But she always keeps sitting a bit longer to train him to be a better living cushion for her.

Mercedes needs to make sure her new slave will be useful or otherwise she would send him away. He has to pass some regular tests. First he is introduced to walk like a dog since every slave has to walk on all fourth. After that she makes him smell and worship her ass and here is the first problem. He isn't really good in licking her ass! So she makes him lie down so she can easily sit on his face to teach him what it means to be her slave.

Caught between her legs

This Scottish young lady actually loved it to have her guys right under her. And talking about "under her" she didn't just meant to have them hierarchically under her, she meant it literally. She loved to lift her sexy skirt and put her ass on their faces to make them smell and obey her. That's where guys belonged and that's what her target was. 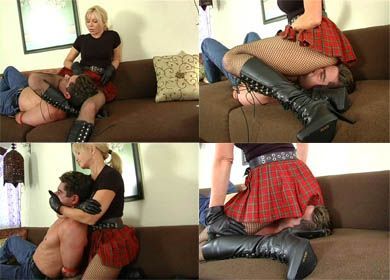 Sat on his face and blackmailed afterwards

Leyla and Jane found it very amusing to change the roles as their private teacher offered them to be the teacher themselves as they were loud and ignored him. He didn't know that those girls were actually going so far to force him to lie on a chair and smell their jeans asses. He was sat on and abused like a living cushion and before he left the room with a red face, totally ashamed and degraded, the sisters told him that if he won't obey them and to whatever they want him to do, they would tell everybody that they sat on his face and that he wasn't strong enough to free himself!

Melissa was happy now that she found someone to share her perverted dreams with her. But there has been a little mistake. This guy didn't want to be tied up and forced to smell her ass and feet. He wanted to tie her up to make her give him a nice BJ. Well things went totally wrong and now she already had him right where she wanted him. She smothered his face with her stinky pantyhose feet and sat on it with her sexy ass. After a while all his manhood was gone and he found himself broken in a humiliating and degrading position. He began to accept what he was. A slave for young women like her.

Tanja doesn't want her son to meet girls since he is her stepson she thinks that he belongs to her and is her property. As she found out that he already met this bitch from the neighborhood, she decided to mark him as her property. As he returned she was already drunk and immediately forced him in this degrading position. As he found himself lying there he already saw her ass lowering on his face. The last words he heard were "you will stay under my ass until you smell like it to make sure no bitch will ever kiss your ass face again".

Bad chores result in a punishment

Cathy is really angry about how her slave has finished his duties and chores in her house. The toilets are not clean as they should be, the bathroom isn't brushed and there are actually crumbs on the ground. After she made him eat them up as fore-punishment, she made him lay down on her bed to continue with the real punishment! She sits on his face with her sexy bbw ass and makes him smell her. She smothers him and reduces his breathing to zero. She controls it with her ass and shows him what real control means. She makes sure he won't ever forget about his chores and of course how to perform them.

Breathtaking action on his face

Katja has tied up her slave on a leather seat to be able to punish him very easy. Next you can see her sitting on his face with her sexy red shorts. She makes him smell her ass and smothers him. He cannot move and also not escape her ass as she lifts it for less than one second just to lower it instantly after he filled his lounges with at least a bit of fresh air...

Lady Melissa forced her slave to put his head into her smother-box - to sit on his face and control his breath by facesitting. First she sits down on his face wearing her tight leather pants before she takes them off and sits down on his face just wearing a very tiny black thong so he can also smell her hot ass when he's not smothered by it for a split-second.

Iwona is a real giantess with a height of nearly 2 meters. Of course she has big hands too and she loves to use them to smother a man. This guy is bound to a chair and completely unable to move when she approaches him and starts to smother him. She just loves to play with his ability to breath - to play with his pathetic life.